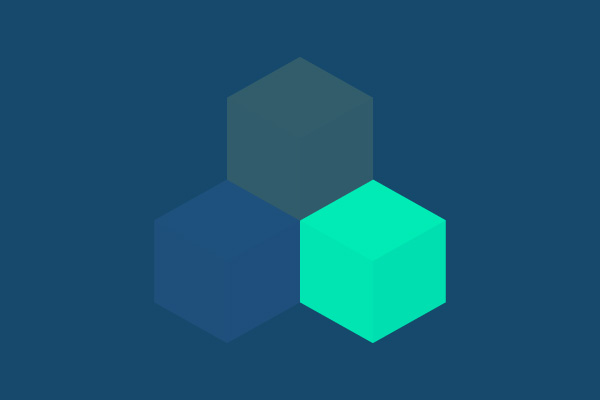 What Is Multidimensional Scaling?

The data in a multidimensional scaling (MDS) problem consists of one or more dissimilarity matrices, where a dissimilarity is a measure of distance between stimuli, and each matrix gives the dissimilarities between the stimuli considered.

In the simplest problems, one matrix is used and the dissimilarities are symmetric. An example of such a matrix is the matrix of intercity mileages often found on road maps, where the distance between two cities is the dissimilarity measure. Often, more than one matrix is observed. For example, several different mapmakers' estimations of the distances between cities may be observed. Since each mapmaker may use different methods for measuring distance, different distance matrices will result. Regardless of the number of matrices observed, the MDS problem is to locate the stimuli (cities) in a multidimensional space of known dimension based upon the observed dissimilarities. 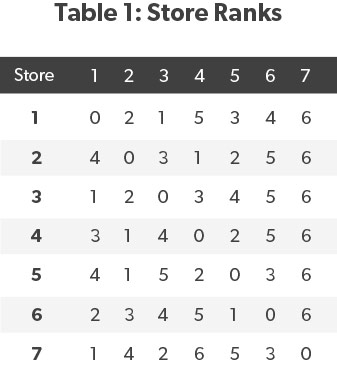 Historically, four types of dissimilarity data have most often been considered as input in multidimensional scaling problems:

Models involving ratio or interval data are called metric scaling models, while models with nominal or ordinal data are called non-metric scaling models. Distance need not be Euclidean. For example, \(r^2_{pq} \) could be used as the distance measure between stimuli \(p\) and \(q\), where \( r^2_{pq} \) is the correlation coefficient between variables \(p\) and \(q\).

Another common consideration in multidimensional scaling is the sampling/measurement scheme used in collecting the data. In the above example, because the rankings were made within each row, comparisons of ranks between rows are not meaningful. If instead a dissimilarity matrix is provided by each of two judges, then the dissimilarities between the two matrices cannot be compared unless it can be verified that the two judges used the same scale and judging criteria. In general, the sampling/measurement scheme used to obtain the data determines strata (or conditionality groups) within which dissimilarities can be compared, while comparison of dissimilarities between strata does not make sense.

Generally, the stimuli are located in an \(\tau \)-dimensional Euclidean space, \( \tau \ge 1\), in such a manner that the agreement between the observed dissimilarities (whether ordinal, ratio, etc.) and the predicted distances is in some sense optimal. In order to locate the stimuli, some model for the distance between stimuli must be specified.

In this example, the model is Euclidean and is given by:

Since the distance between stimuli is translation invariant, the location of the origin is arbitrary. In the following, the origin is assumed to be zero, so that \(\sum_i X_{ik} = 0 \).  Also, the Euclidean model, unlike other distance models, is rotation invariant (i.e., multiplying \( X \) by an orthogonal matrix \(T, X = XT\) yields the same distance measures). This means that the configuration obtained is not unique rotationally. Usually, no attempt is made for the Euclidean model to obtain a unique solution with respect to rotation, although any of the orthogonal rotations in factor analysis could be used for this purpose.

where \( n \) is the number of stimuli and \( \tilde{\delta} \) denotes the optimal dissimilarities, called the disparities.

In metric data, \(q\) is optimized with respect to \( \delta \) only, whereas in non-metric data, q is optimized with respect to both \( \delta \) and the disparities \( \tilde{\delta}_{ij}\). Let \(\hat{\delta}\) denote predicted values of \( \delta \). Disparities in non-metric data are found from the predicted distances \(\hat{\delta}\), such that the rank requirements of ordinal data or the equivalence requirements of nominal data are satisfied and an optimal criterion function is obtained. With the stress \(q\) above, ordinal data disparities are optimal when they are taken as the monotonic regression of \( \hat{\delta}\) on the observed ranks within each stratum. In categorical data, the disparities \(\tilde{\delta}\) are optimal when they are estimated as the average of all \(\hat{\delta}\) within the same category and stratum.

The numerator in the above criterion function is a least squares criterion, whereas the denominator (or \( \omega \) ) is a scaling factor. Scaling is required in non-metric data to prevent the solution from becoming degenerate. If the denominator were not present, \( q\) could be made as small as desired by simultaneously scaling both \(\hat{\delta}\) and \(\tilde{\delta}\) downward. Different criterion functions are often used in metric data, which do not have this scaling requirement.

As an example of the monotonic regression used in optimizing \(\tilde{\delta}\) in ordinal data, consider the following table in which the data corresponds to the store example discussed above. 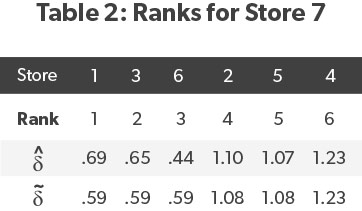 An optimal configuration estimated for the multidimensional scaling example above is given in Table 3 and plotted as the symbol ‘+’ in Figure 1. The store locations which gave rise to the rankings in Table 1 are plotted as symbol ‘o’ in Figure 1. In comparing the actual with the optimized store locations, note that scale is unimportant since ranked distances were used. (Scale differences between the axis are important, however.) For these data, the optimal criterion is 0.0, indicating a perfect fit. 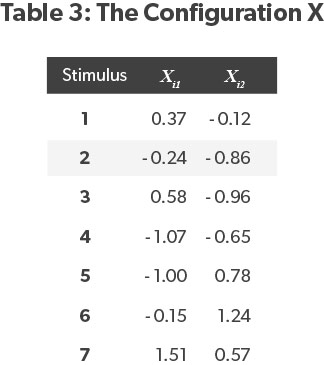 Even though the fit is perfect, differences in store locations between the observed and estimated data occur because of the lack of uniqueness of the estimated configuration in non-metric scaling. In the figure, scale changes and rotation with possibly a translation bring the two figures close together. 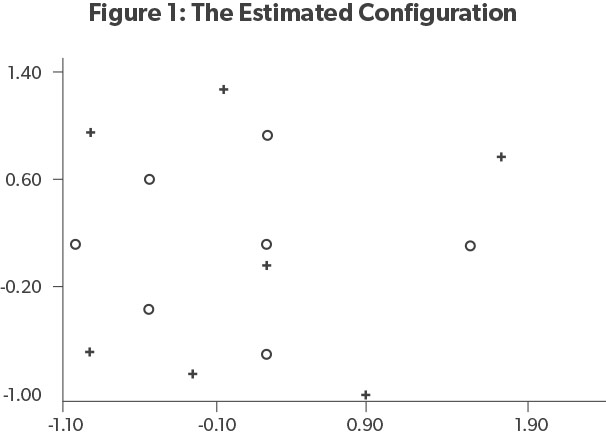 The same uniqueness problems occur when the optimal stress is not zero, but the argument is complicated in this case by the changing denominator. In general, if all other parameters are assumed fixed, then an interval of estimates for each estimated parameter, all yielding the same stress value, is available. The interval will change, of course, when other model parameters are allowed to vary.

Learn how IMSL Numerical Libraries allow you to address complex problems quickly with a variety of readily-available algorithms. 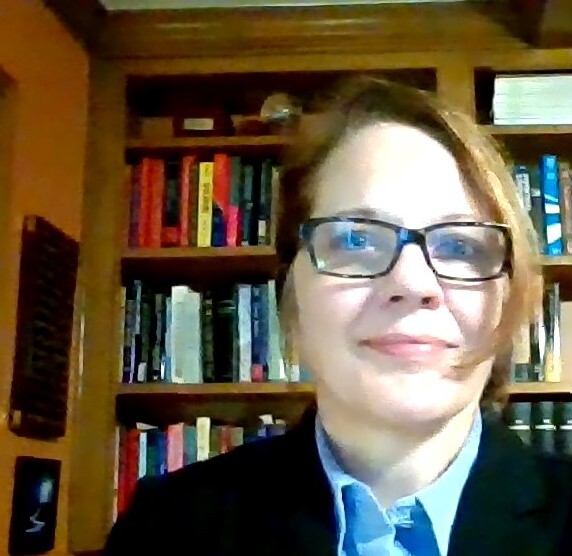