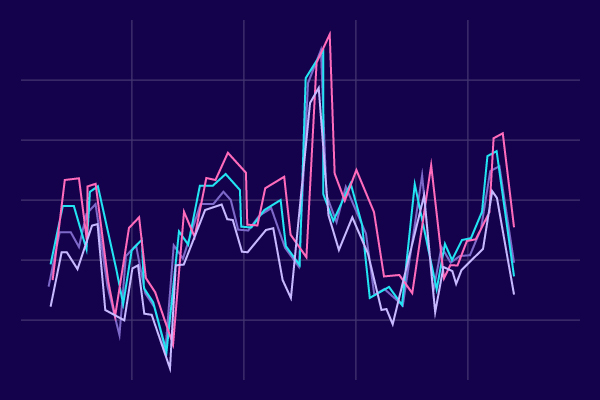 Time series analysis is used by many industries in order to extract meaningful statistics, characteristics, and insights.

What Is Time Series Analysis?

Time series analysis is the analysis of data that is indexed by time and evolves over time.

Time series data is common in every industry and scientific discipline representing processes that occur naturally and those arising from participation in our economy. We analyze time series data to discover patterns, signals, business trends, cycles, and other dependencies, in order to better understand the past and make better predictions for the future.

An example of time series that all of us think about is rainfall and temperature. It’s common to look at daily, weekly, or monthly average temperatures or rainfall totals by region. During a heavy storm, it’s also not unusual to monitor rainfall per hour. Time series data can be and often needs to be considered at different frequencies.

In a graph it’s easy to see extreme outliers, like in the bottom half of figure 1, which shows the cumulative rainfall in the Houston area. Note the steep increase in late August, 2017, marking the arrival and duration of Hurricane Harvey.

Autoregressive (AR) models assume that the value of the series at a given time depends on past values of the series.

Moving average (MA) models assume the values consist of a mean (average) plus or minus a random error.

There are models that combine these two types and further generalize the relationships and assumptions.

The models ARMA, ARIMA, ARCH, and GARCH are well-known examples of these classes of models, sometimes referred to as Box-Jenkins after the originators, and there are many other variations Other types of time series models include neural networks, dynamic linear models, and Kalman filters.

Time series are ubiquitous in the finance industry. From historical data of market indices to daily interest rate fluctuations, the amount of data is often overwhelming. One major issue with such data is the individual time series’ suitability for a specific method of analysis.

Many techniques require or assume the input time series to be “well behaved”. That is, the series is stationary, ergodic, and free of outliers and missing values. Due to the dynamics of financial markets, such clean data is not likely to be found except for in the smallest subsets, and some officially reported data adjusted for inflation and seasonality. Raw time series data usually requires pre-processing to clean and fill in missing data, detect outliers, and then further steps to validate the assumptions that the methods require.

The analysis of financial time series often revolves around a singular goal: to make a confident prediction of future behavior based on historical performance. Such forecasts are typically derived from models such as ARCH, GARCH, and ARMA.

While many analysts will treat such numerical models as black boxes that accept only their well-conditioned time series as input, the reality is that the models take some specific knowledge of the dynamics of the input to be used effectively.

For example, the common GARCH and ARMA(p,q) models require two parameters p and q, the number of autoregressive parameters and the number of moving average parameters, respectively. Finding the proper values is often an iterative manual technique: one re-runs the model until the output is deemed the best (often subjectively).

Automatic determination of parameters should be a requirement for models, especially those like ARIMA(p,d,q), which requires four different input parameters (including s, a parameter related to identifying seasonality). The IMSL method auto­_arima finds the best parameter settings for the ARIMA class of models.

In this article, we looked broadly at time series analysis and its application in the finance industry, as well as some commonly used methods and models.

In upcoming articles, we will take a closer look at the auto_arima function, how to select the best model for your time series data, methods for estimating missing values, how to account for seasonal variations., and how to identify outliers.

Looking for additional insight into time series analysis? These resources are a good place to start.

Want to see how IMSL can apply to financial applications? Be sure to check out our financial solutions page for more information.

IMSL provides algorithms for advanced time series models and a complement of supporting methods for analyzing time series. Want to learn more? Click the button below to speak with us today.