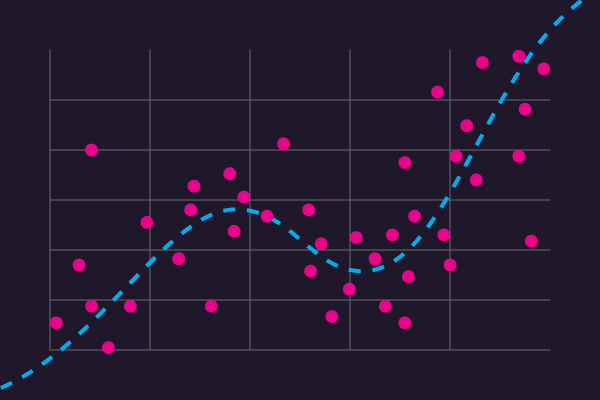 What Is a Regression Model?

A regression model provides a function that describes the relationship between one or more independent variables and a response, dependent, or target variable.

For example, the relationship between height and weight may be described by a linear regression model. A regression analysis is the basis for many types of prediction and for determining the effects on target variables. When you hear about studies on the news that talk about fuel efficiency, or the cause of pollution, or the effects of screen time on learning, there is often a regression model being used to support their claims.

A linear regression is a model where the relationship between inputs and outputs is a straight line. This is the easiest to conceptualize and even observe in the real world. Even when a relationship isn’t very linear, our brains try to see the pattern and attach a rudimentary linear model to that relationship.

One example may be around the number of responses to a marketing campaign. If we send 1,000 emails, we may get five responses. If this relationship can be modeled using a linear regression, we would expect to get ten responses when we send 2,000 emails. Your chart may vary, but the general idea is that we associate a predictor and a target, and we assume a relationship between the two. 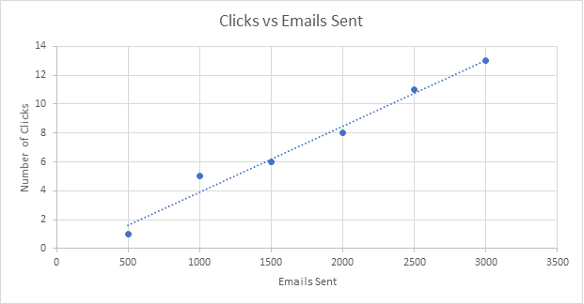 Using a linear regression model, we want to estimate the correlation between the number of emails sent and response rates. In other words, if the linear model fits our observations well enough, then we can estimate that the more emails we send, the more responses we will get.

When making a claim like this, whether it is related to exercise, happiness, health, or any number of claims, there is usually a regression model behind the scenes to support the claim.

In addition, the model fit can be described using a mean squared error. This basically gives us a number to show exactly how well the linear model fits.

More serious examples of a linear regression would include predicting a patient’s length of stay at a hospital, relationship between income and crime, education and birth rate, or sales and temperature.

Multiple regression indicates that there are more than one input variables that may affect the outcome, or target variable. For our email campaign example, you may include an additional variable with the number of emails sent in the last month.

By looking at both input variables, a clearer picture starts to emerge about what drives users to respond to a campaign and how to optimize email timing and frequency. While conceptualizing the model becomes more complex with more inputs, the relationship may continue to be linear.

For these models, it is important to understand exactly what effect each input has and how they combine to produce the final target variable results.

This model will initially show a positive relationship between number of emails and the response, but as the number of emails increases, the model will flatten out and become almost constant. The important takeaway here is that it is important to understand when a model could potentially be non-linear. If you make assumptions based on a linear model, you could get results that are very different than expectations.

While the other items we have talked about until now are specific types of models, stepwise regression is more of a technique. If a model involves many potential inputs, the analyst may start with the most directly correlated input variable to build a model. Once that is accomplished, the next step is to make the model more accurate.

To do that, additional input variables can be added to the model one at a time in order of significance of the results. Using our email marketing example, the initial model may be based on just the number of emails sent. Then we would add something like the average age of the email recipient. After that, we would add the average number of emails each recipient has received from us. Each additional variable would add a small amount of additional accuracy to the model.

This process is a stepwise modeling approach to getting the most accurate model. Alternatively, the analyst may start with a larger set of input variables and then incrementally remove the least significant in order to get to a desired model.

When to Use Regression Analysis

One example is any correlation you can establish between GDP, consumer confidence, or industry benchmarks and your own business, which may help with investing or strategizing.

Another valuable example would be if a relationship can be established between business decisions and outcomes, these decisions can be better tuned for optimal results. For example, the price of a product and the number of sales is often correlated and can be modeled using regression models.

How to Create a Regression Model 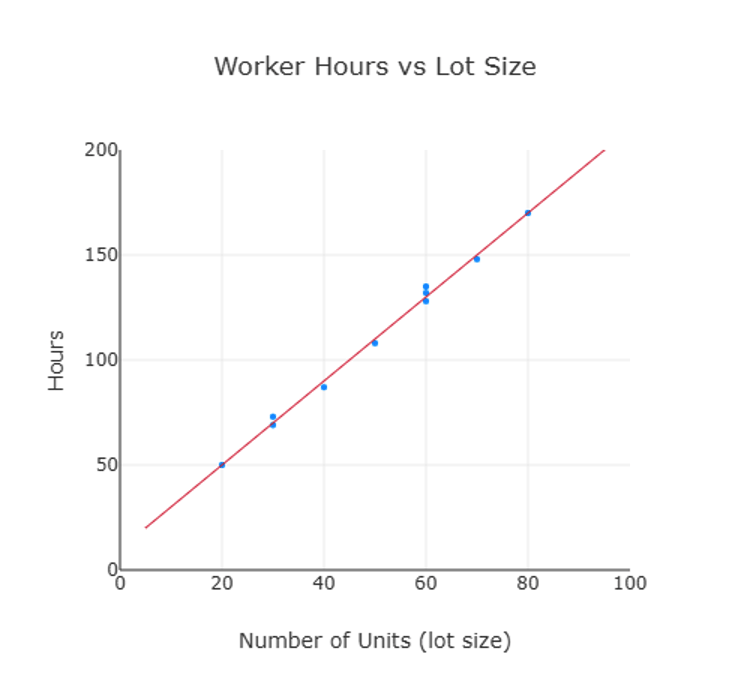 The plot indicates that lot size is a strong predictor for number of hours worked, as expected. There is some small variation in the hours worked at the same lot sizes (see at 30 and 60), due to other random factors. Presumably if more observations were taken at other lot sizes, a similar variation in hours would be seen.

The regression fit suggests a minimum 10 hours of work and two extra hours for each additional unit that is produced. The line is shown in red in the figure above.

With the regression formula in hand, the shop supervisor can plan staffing needs, costs, and production schedules. Any prediction from a regression line that is outside the observed range of the data should be met with some skepticism, however.

For example, the regression model predicts 2,010 worker hours for producing 1,000 units, but since 1,000 is far outside the observed range of lot sizes, this prediction is not reliable. There are likely supply or capacity constraints that would make 1,000 an infeasible lot size. The shop manager of course will be aware of those constraints.

The code below can be used to perform the regression fit and produce the coefficient summary using IMSL for C. 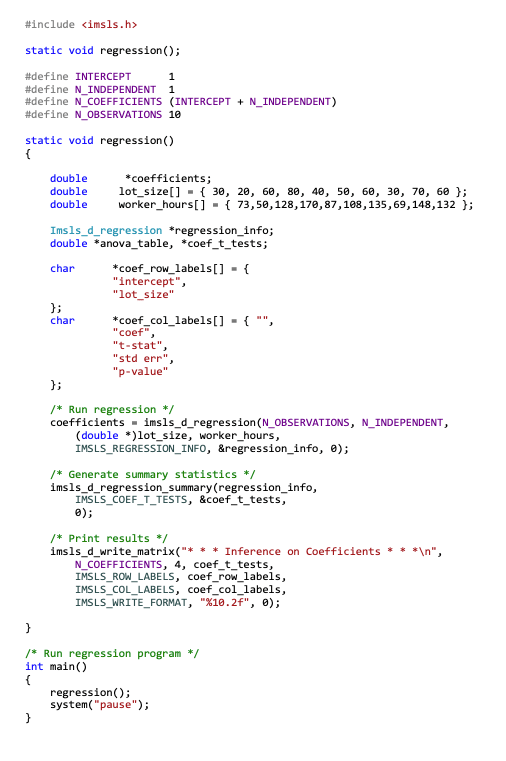 To start, try IMSL free. IMSL libraries have been trusted for decades for accurate and reliable numerical functions. Sign up using the link below.